In 10 short years, the Ellen MacArthur Foundation (EMF) arguably has done more than any other group to define and advance the circular economy.

Its landmark report, “The New Plastics Economy,” sounded the alarm in 2016 that if “business as usual” continues, by 2025 the ocean may hold more plastic than fish by weight. Its commitment by the same name has attracted many of the planet’s biggest brand names, among 450-plus signatories, to dramatically slash their use or production of plastic by 2025. PepsiCo, Coca-Cola, Unilever and even Tupperware have signed on with governments and NGOs to do away with “unnecessary” plastics and innovate so that other plastics will be reused, recycled or composted; and kept out of natural systems.

Only five years ago, few corporate leaders had plastic pollution on their official radar.

Yet Dame Ellen MacArthur herself is floored by the rapid pace of change in business that has been forced by the COVID-19 pandemic. In food, for instance, business models and distribution methods were reshaped in a matter of weeks, as supply chains flexed to keep groceries in stock and farmers struggled to offload overripe crops. Digital networks and online platforms scaled to meet spiking demand during social distancing. In all this, she finds hope for systemic change toward a circular economy. 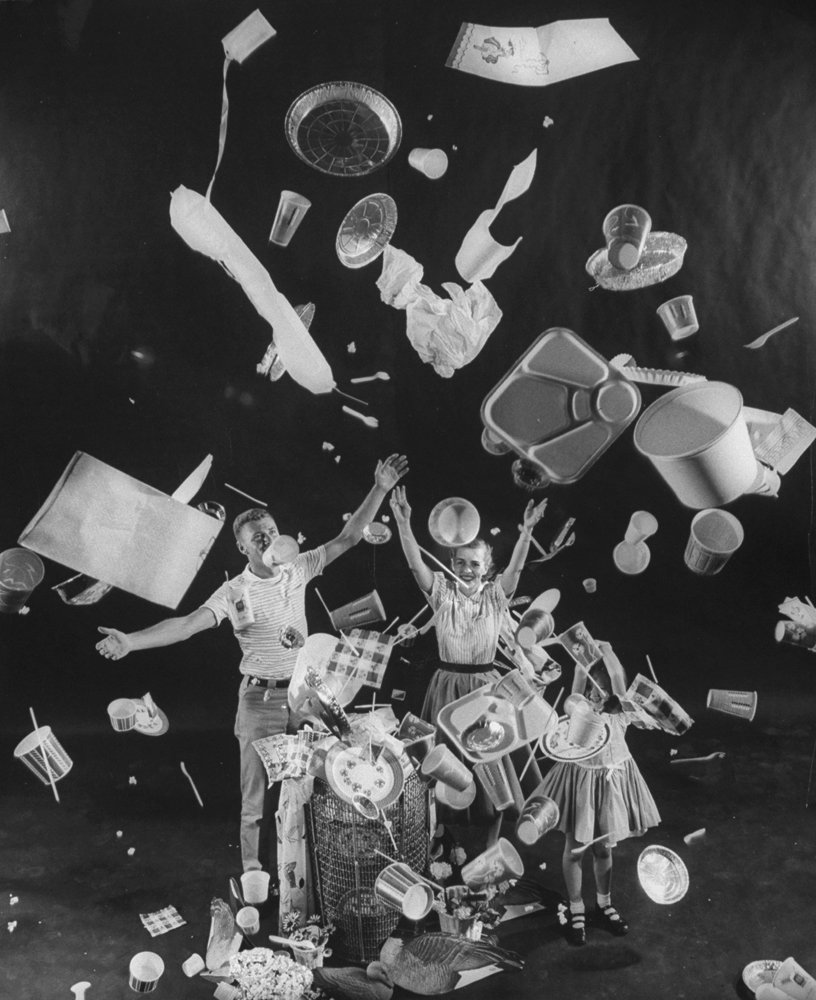 Much of industry continues to embrace “throwaway living,” which was celebrated in this Life Magazine photograph in 1955.

“People have gotten used to having to jump quickly to change the system,” EMF Chair MacArthur said Tuesday at the GreenBiz Circularity 20 virtual event. “That hopefully will set a precedent for how we can do things in the future and how we can shift quickly in a light-footed way.”

Time isn’t on the side of those who hope to prevent the projection by the Pew Charitable Trusts that plastic waste flows into the oceans will double in the next 20 years. Already, if all the world’s plastic waste could be shaped into a plastic shopping bag, all of Earth would fit inside of it, noted Morgan Stanley CMO and CSO Audrey Choi. Picture a double bag in 30 years.

Although the financial services firm is far from being in the business of producing or using plastic products, last year it set a resolution to work to keep 50 million metric tons of plastic out of ecosystems by 2030. It’s unique but not alone. The strength of collaborations emerging toward circular solutions, among corporate competitors as well as between business and government, has surprised MacArthur, for one: “The system has to change and I think more than ever, the companies involved in the system want to change.”

Her remark came moments before the launch of the U.S. Plastics Pact by EMF, The Recycling Partnership and WWF. Its 60 signatories across public and private sectors agree to advance circularity goals for plastic by 2025. Similar national plastics pacts are at play in Chile, France, Netherlands, Portugal, South Africa and the United Kingdom.

Choi is among the execs sounding a call to action to propel business in a new direction on plastic. “I can’t think of another instance in which it would be a smart business position to take a finite natural resource, turn it into a product we use on average for 12 minutes and throw it away,” she said, citing that single-use plastic wastes $120 billion in economic value each year.

“Business leaders often care but say either they can’t do anything about it because they’re not a major part of plastic value chain or because the problem is just too big,” she said. “It’s a global economy-wide issue but the fact that it is everywhere should inspire us to action. I believe that in virtually every C-suite you could go around the table and identify why every C-suite officer can care and benefit from trying to address the problem.”

With the experience of having crafted Morgan Stanley’s Plastic Waste Resolution with input from the highest executives, Choi shared these specifics for others seeking to achieve buy-in from the top (she skipped the CEO, because all of it rolls up to the CEO eventually):

CFOs initially may frown on making a change by switching costs or assume that alternatives are more costly. But they will find plenty of low-hanging fruit that can reduce operating and capital costs. For example, facilities that adopt cleaning products in powder or concentrate, in reusable containers, could shrink their shipping costs and carbon footprint while increasing profit margins. And companies have benefited from shifting public sentiment on plastics when they’ve issued corporate debt with proceeds tied to plastic waste reduction.

CLOs have to keep up with a rapidly evolving patchwork of state laws governing plastic use and disposal, driven by activists, regulators and consumers. Bans on plastic straws, grocery bags and cup lids keep piling up, even if many are on hold during the coronavirus crisis. But company legal officers can streamline compliance and reduce liability by targeting plastic. Woe is the CLO who ignores public sentiment and risks lawsuits or fines; plastic waste branded with their company’s logo is a time bomb waiting to appear in the wrong place at the wrong time.

For innovation chiefs, Choi sees the benefit as fairly intuitive. “Plastic waste reduction can be their muse, inspiring innovation through new products, new services, and new ways to engage customers,” she said. There’s an obvious wow factor to using new material that’s truly biodegradable or recyclable, just as IKEA is replacing plastic foam packaging with mushroom-based material that can be grown in a week, reused and then composted in a month.

There’s a clear and growing opportunity for CMOs as customers vote with their purchases against plastic waste. For example, being the category leader in reducing plastic waste can be a chief differentiator beyond simply competing on price. “Selling your product in a beautiful, branded reusable container comes with the added benefit of the consumer looking to you and only you to refill that container.” If plastic rose to amazing heights in a matter of decades thanks to corporate marketing efforts, imagine the next revolution in plastics coming from the same source.

“It’s pretty self-explanatory why we should care about plastic waste reduction,” Choi said. In addition to the sustainability aspects, plastic goals are an opportunity to forge C-suite alliances and build bridges with clients and corporate partners, potentially leading to innovative programs and products.

To reduce the plastic burden, Choi envisions drawing on the kinds of scientific discoveries, ingenuity, entrepreneurship and marketing that made plastic part of daily life in past decades.

There are special challenges in this COVID-19 era, as single-use plastics, including disposable masks laced with microplastic fibers, flood waste streams and waterways at unprecedented levels. Yet advancing circularity also helps to meet climate targets. What does MacArthur consider crucial to making a difference on circularity in the next year or so?

“We have an opportunity right now, like we’ve not had before, because of something tragic, to build in a different way,” including for the automotive, industrial and infrastructure sectors, she said. “Accepting what that looks like and making it happen, that for me, that’s the step.”